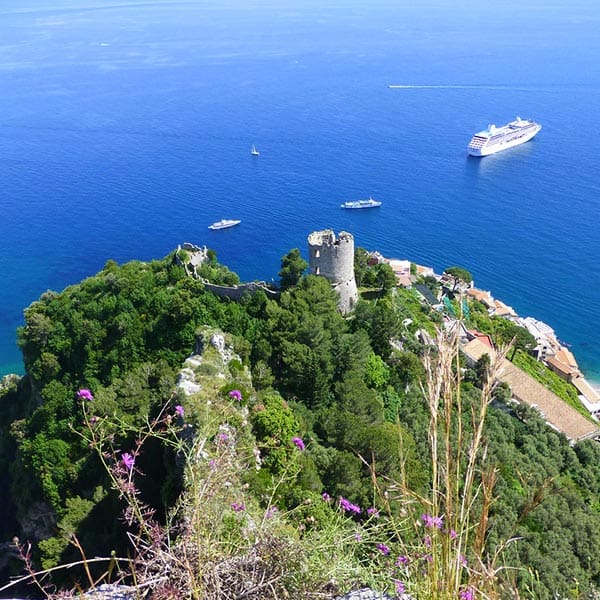 Explore the exclusive path that connects Ravello to Amalfi admiring Escher’s works with a professional hiking guide. The trail is 11 km long.

This pleasant and easy walk leads to one of the landmarks of Amalfi: the walls of the Dukedom of Amalfi and the Ziro Tower, one of the many towers dotted along the coastline which was used to spot the approach of Saracen ships. The trail will start from Ravello, through the paths you will pass by Pontone and then reach the tower.

On the spur of rock that extends towards the sea, between Atrani and Amalfi, rises the Ziro Tower, with a narrow walkway, surrounded by embattled walls, which connects it to the extreme point of the esplanade.

The first records of this tower date back to 1151, when it was still called “Rocca di S. Felice”, whereas starting from 1292 it has become Turris Cziri.

This structure is linked to a story that is well known among the locals; it is said that in the early of the 16th century, Giovanna D’Aragona, the Duchess of Amalfi, and her children were locked up in the tower. Giovanna was accused of having an affair with the court butler, soon after her husband, Alfonso Piccolmini, Duke of Amalfi, died. The relationship caused such a scandal that the Duchess’s brothers decided to imprison their sister and her children, still mere infants at the time, in the tower, where they were murdered.

The excursion continues towards Atrani where it will be possible to admire the works of Escher, engraver and graphic from Holland. Escher’s works had significant influence during his stay in the Amalfi Coast. He was literally struck by the persuasive plasticity of South of Italy light and, above all, by the mixture of Roman, Greek and Saracen elements present in the architecture of Ravello, Atrani and Amalfi.

The excursion is not suitable for those suffering from heart problems or knees problems. We recommend to be prepared with sportswear and trekking shoes, sunscreen, sunglasses and a bottle of water.

Fill out the form to check availability and book

This website uses cookies to improve your experience while you navigate through the website. Out of these, the cookies that are categorized as necessary are stored on your browser as they are essential for the working of basic functionalities of the website. We also use third-party cookies that help us analyze and understand how you use this website. These cookies will be stored in your browser only with your consent. You also have the option to opt-out of these cookies. But opting out of some of these cookies may affect your browsing experience.
Necessary Always Enabled

Any cookies that may not be particularly necessary for the website to function and is used specifically to collect user personal data via analytics, ads, other embedded contents are termed as non-necessary cookies. It is mandatory to procure user consent prior to running these cookies on your website.